With the price of gas going up and up, does it make sense to get rid of the SUV or V-8 car you’re now driving to buy a much smaller, more economical car?

The quick and short answer is… NO!!!!

All we ever hear nowadays is “Going Green.” But what is the cost to you and me for going green? After all, we are the ones that have to use our disposable incomes to purchase products and services in order to make it work. We are constantly being bombarded with people telling us to do this or that, but what is right for you? And at what cost?

A recent report out of the U.K. shed some light on what the cost to consumers is going to be if they chose to buy an “eco-friendly” small car. They reported the real cost of going green – with a typical buyer driving 12,000 miles a year will have to wait six years, six months and cover 78,000 miles before it pays for itself – more than three times around the world.

According to Auto Express magazine, the car used in the comparison was a Volkswagen Polo 1.4 TDI BlueMotion diesel (not available in North America) which emits 99g/km of carbon dioxide (5g less than the Toyota Prius hybrid)  and consumes 20 miles per gallon less than standard models. However, it costs over $2,000 more than a standard Polo with the same specifications.

Jack Rix, of Auto Express, said: “Going green could cost more than motorists think. Eco badges promise a car is kinder to the environment and your wallet. But our investigation reveals it could take more than six years of pump savings before buyers see any financial benefit.”

That’s one side of the equation….other things to consider….

Trading in or selling your SUV or V-8 powered car right now is going to hurt big-time. All the auto manufacturers are hurting right now because people are abandoning SUV’s and trucks. What do you think a dealer or a private buyer will give you for your big SUV right now? Do you think any dealer really wants to add your truck/SUV to the over-inflated inventory they already have? (Nissan has a 10 month supply of new trucks sitting on dealer’s lots right now).

Which now leads us into another equation – buy a very heavily discounted truck/SUV/V-8 car and you’ll have more than enough money left over to pay for the additional fuel. You’ll get low-interest rates and a fuel-efficient V-8 vehicle that can in some cases give you better fuel mileage than a small undesirable car. Let me give you some examples to back this up.

One of the main things that have to be considered is how a test is performed. Is it the same driver, the same route etc? One advantage I have is that I’m the only driver and the route is always the same. I don’t change my driving style unless I’m specifically trying to squeeze more MPG’s out of a vehicle – a hybrid for example. If it’s a sports car or powerful V-8 I tend to use the go pedal a little more vigorously. Regardless, I looked back at some of my road tests from the past year or so and here are some findings that might surprise you. I’ll list the government’s fuel number and my actual mileage.

In real-world driving, the Toyota returned deplorable mpg numbers. The Dodge on the other hand – while not fantastic numbers overall, only gave up 2 mpg to the Toyota, but it is bigger – virtually a full-size truck, can actually tow something, and is a fully loaded 4X4 – not a bare-boned wheezing 4-cylinder that would cure even the worst insomniac of his problem.

Next up – three of my favourite cars, versus three less-than-thrilling economy cars. This is truly a test of how low can you go…. 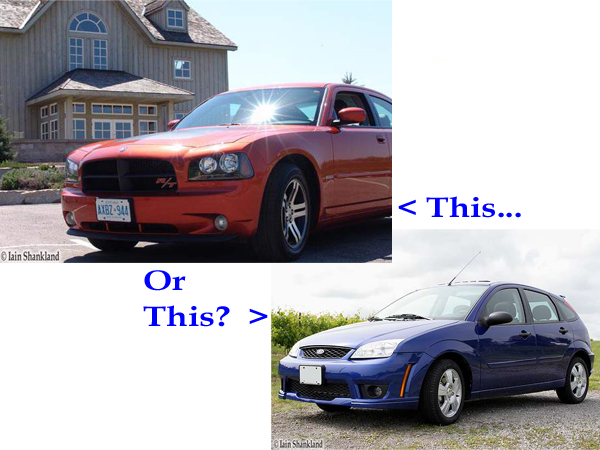 The Results
The mind-numbing-moving-speed bump Matrix got a respectable 25.8 [9.1 L/100km], but I couldn’t give the car back to Toyota fast enough! The gutless life-sucking Suzuki averaged 21 mpg [11.2 L/100km], while the big V-8 powered Mustang and Charger R/T got 20.4 mpg [11.9/100km]. Considering I was wearing lead-weighted shoes when driving the V-8’s – whadda ya think I could’ve gotten if I’d actually tried to get good gas mileage? Which would you rather own or be seen in? The Focus only got 2.5 more mpg than the V-8 duo – again – what would you rather drive? And the blindingly fast twin-turbo 6-cylinder Bimmer matched the boring Focus (the BMW 335 ix improved the mpg to 24 [9.8 L/100km]).

SUV’s are all over the place when it comes to fuel consumption, but here’s a range and some numbers that might surprise you….

A good compromise would be the Charger or the Mustang. Taking it easier with my right foot would have certainly improved the fuel mileage immensely. They are both bigger and safer than the econo-cars and you’ll certainly get them at a discount at your local dealership. And don’t forget – you’re going to be putting gas in any of these vehicles regardless of size, fuel numbers and costs – you should at least enjoy the car, not resent it like Ebenezer Scrooge.

Tips on saving fuel.
Look ahead: Reading the road ahead can avoid wasting fuel by being able to adapt and take measures before everyone else. You’ll avoid unnecessary sudden braking and acceleration as well as being able to see if something is blocking your lane.

Steady speed. By using the cruise control you can minimize abrupt movements of the gas pedal. This could be your biggest fuel saver if used properly.

Don’t warm up for unnecessarily long periods. Cars no longer need to be warmed up in winter to the extent they used to. In the winter you have to if the windshield needs to be cleared, but in warmer temperatures, there is no need to “warm” the car up.

Use air conditioning wisely. Don’t have it running at full blast all of the time. Some people recommend you drive with the windows down instead. That can be even worse. Even at slower city speeds of 35 mph, the rear window acts as a parachute and can lower your mpg by 10 – 30%.

Take public transport. You’re paying for it in your taxes and government hand out – use it. You can always use shoe transit. Get some exercise for the short trip instead of driving.

Don’t idle. When sitting at a railroad crossing while that 18-mile train goes by – turn off the engine! Same thing if you live in an area where bridges are always going up to allow boats to pass through. It’s just common sense.

Convert your car to LPG (Liquid Propane Gas) or NG (Natural Gas). You can recoup the conversion costs in approximately 18 months – and cut your emissions of nitrous oxides and CO by 80%. LPG and NG currently cost around 60 cents per litre. You can even use the natural gas from your home to fill up the cars tank! As a personal story, I used to have a full-size Dodge van that I converted to NG in early 1991. The engine ran cooler and when it came time for an oil change, the oil came out almost the same color as it went in. With the press of a button I could go back to using regular gas if I was out of range of a gas station that sold NG. The technology is far more advanced now than it ever was back then. I also got tax incentives to convert over.

Check your trunk. Do you lug stuff around that you don’t need? Is it July and you still haven’t taken your hockey equipment out of the trunk? It might now appear to matter, but it does – see my article Is It Worth Buying a Hybrid To Save Save Money On Fuel?

Roof racks. If you don’t need it on a daily basis – take it off!! A roof rack can destroy your fuel economy by 10 – 30%. Those Hummers and Toyota FJ Cruiser owners would do themselves a favor by taking the factory roof racks off unless they get used regularly (and let’s face it – they never get used).

Cylinder de-activation. Look at this type of engine the next time you are in the market for a new vehicle. Instead of running on 8 cylinders, the car can run on 6 or even 4 cylinders, saving fuel. Don’t confuse this set up as the same disastrous effort GM came up with back in the early ’80 – that didn’t work. You can even get a Honda minivan the goes from 6 to 4 to 3 cylinders. The same engine is in the Accord and the new Pilot too.

Myths and old wives tales –
Accelerate gently: Taking five seconds to reach 10 mph can save 11 percent in fuel consumption compared to average drivers. Do not accelerate up hills any more than necessary.

Bunk! The vehicle will use more fuel as it struggles to get up to speed. Get up to the posted speed limit quickly (don’t bury the throttle) and ease off the gas to maintain the speed. Get the car into its highest gear as soon as possible to save fuel.

Coast whenever possible: Driving in neutral does not save fuel because the fuel injection system will continue working to keep the engine running. It’s also very dangerous to put the car into neutral – what if you have to avoid a collision?

Conclusion.
We all have to make up our own minds and chose what is best for us when it comes to vehicles, but don’t make a knee-jerk decision to disposing of your SUV/truck or V-8 powered car just because the price of gas has gone up a bit and people are reacting like it’s the end of the world. They’ve been paying more than $8 per gallon for years in Europe – they still drive and enjoy life. You’ll adjust – take the time to adjust to higher prices but don’t lose your mind!

As for Going Green..
Why do the all-important questions never get asked by the mainstream media? Such as….

But the most important question of all is this…

Why are the various governments spending Billion$ of dollar$ throwing money at any half-backed theories when getting old junkers off the road would solve 99% of the problem!!!

Here’s a fact: one car from the 1980’s emits more CO2’s in one year than 10 new SUV’s do throughout their entire life cycle. It would make far more sense to pay people with Junkers $1,500 – $2,000 towards a new vehicle, than to allow them to remain on the road – un-doing all the good that new cars are doing FOR the environment. Does anyone know a self-important actor or rock star that we could get to make this their “cause” and help the planet? Anyone?

Am I anti-green? Absolutely not! I re-cycled long before somebody put a trendy name to it. I don’t crank up the thermostat and open all the windows. I walk the 200 feet to my mailbox instead of taking the car. I switch the lights off when I leave a room. It’s not brain surgery – it is just common sense. It’s time more people used it instead of waiting until some self-absorbed out of work actor makes it an issue and starts bullying people into his way of thinking. 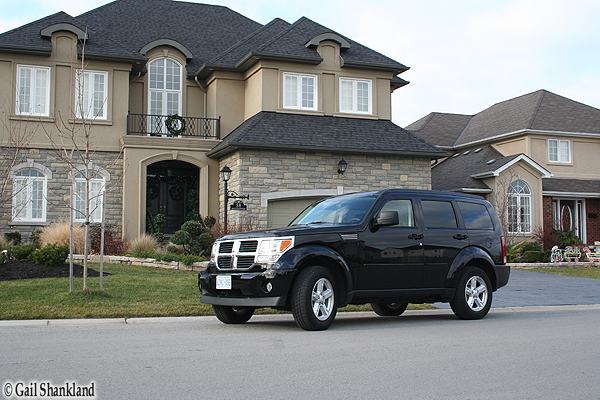