Last fall I had the opportunity to drive the Mazda6 hatchback, and it remained one of my favorite cars – until I drove the MAZDASPEED6!  However, it has one big flaw in my opinion. If you’re a regular reader you already know that I prefer the versatility of a hatchback over a sedan, so to me, it’s extremely unfortunate that the MAZDASPEED6 isn’t available in a hatchback version. Nevertheless, the MAZDASPEED6 is an incredible car – think of it as an RX-8 for families.

When I picked up the MAZDASPEED6 at the Canadian headquarters in Toronto, the gentleman handing me the key told me I’d love this car. He explained to me that he has been with Mazda Canada since 1971 and loves the rotary engine, but if someone gave him $5,000 plus an RX-8, he’d still take the MAZDASPEED6 any day. My eyes lit up – that’s what I want to hear! I LOVE the RX-8 – it’s by far the only car on my list that I would buy without hesitation, money-no-object – if I ever got the option. One more thing he told me: it’s a stealth car – the police don’t even look at it!  Excellent!

First Impressions
Walking through the parking lot I was surprised to see a white MAZDASPEED6 sitting in there waiting for me (actually it’s a very nice pearlescent white) – surprising since it isn’t available in white according to Mazda’s North American websites.

The MAZDASPEED6 is powered by a direct-injection turbocharged version of the 2.3 litre four-cylinder engine used in the regular Mazda6. In turbo form, it delivers 270-horsepower and 280 lb.-ft. of torque, making the MAZDASPEED6 the highest performing, best-handling sedan Mazda has ever designed. In addition to its 270-horsepower engine, the MAZDASPEED6 is equipped with an active torque split All-Wheel-Drive system. The onboard computer automatically determines driving and road conditions based upon real-time input on steering angle, yaw rate, lateral G-force and engine status, to deliver optimum drive power to each of the 215/45R18 performance tires. With a curb weight of 3,589 lbs [1,641kg], the MAZDASPEED6 feels solid and well built, but it doesn’t feel overburdened or heavy. Regular Mazda’s come with Zoom-Zoom standard, this one comes with ZOOM-ZOOM! 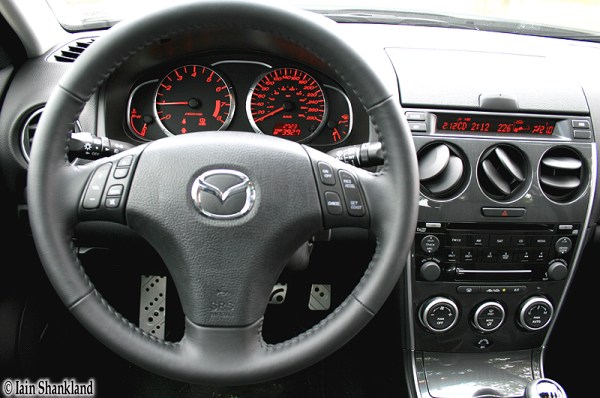 Before I’d even left the parking lot my eyes were wide with anticipation of what this machine could be capable of. The rack-and-pinion steering (with engine-speed-sensing variable power assist) is quite heavy at low speeds, but as the speed rises the steering matches perfectly to the increased velocity. The clutch and gearbox are very heavy when compared to my wife’s Mazda5, but that could be because it’s designed for a lot more abuse. Smooth shifts from a standing start require a lot of concentration, as do shifts from first to second gear. Once past the initial launch it’s extremely easy to modulate the clutch and gearbox for silky-smooth shifts right through to 6th gear. The car only had 1,188 miles [2,200 kms] on it, so it’s highly possible that it’ll smooth out between first and second gear once it’s broken in a little more. I found when I wasn’t in a hurry to launch the car from stoplights that starting off in second gear really made a big difference in how smoothly I could start out.

The driver gets an 8-way power-adjustable seat with lumbar support while the front passenger has to make do with manual controls and no lumbar adjustment. The heated leather seats are very comfortable, but I think they need more lateral bolstering – especially during spirited driving and the sharp bends and corners that you naturally gravitate to while driving this car. Entry to the freeway via the sharpest possible bend was always the rule of the day, along with seeing how fast and far you can push the car without starting to lose grip. The seats didn’t offer as much grip as they could have, and the driver lost butt-grip long before the car lost any hint of traction. I’d recommend to Mazda that they replace them with seats from the MAZDASPEED3.

Like the RX-8, it’s impossible to drive the MAZDASPEED6 at anything other than full-bore. You just can’t go driving around in a leisurely manner; you have to get there – FAST! Most of it has to do with the turbo engine and the surge of power that comes on-line once the revs start to rise. Thanks to the All-Wheel Drive system, there’s no torque steer to deal with, and all of the power is transferred directly to the pavement. Rev the engine, dump the clutch and you’re off like a scolded cat – no fuss, just the thrill of everything around you starting to blur. Combined with the AWD, the MAZDASPEED6 also gets other go-fast and safety parts such as Traction Control System (TCS), Dynamic stability control and a Limited Slip differential.

Stopping is just as dramatic thanks to the Anti-Lock Braking System that also incorporates EBFD (Electronic Brake Force Distribution). If you’ve ever been in a panic-stop situation with a car that has EBFD, you never forget the sensation and the distance at which you scrub your speed when it kicks in. Think of it as a turbocharged braking system – it’s simply incredible.

Encumbered by holiday traffic in the Niagara region where we live, just getting to your destination requires a great deal of patience. Minivans and brain-dead drivers permeate the region and clog all the roads in and around wine country which takes a lot of the enjoyment out of driving because some days you’re lucky to reach highway speeds around here. To put a positive swing on a bad situation, there’s no better vehicle to have in this case than the MAZDASPEED6 – whenever a tiny spot opened up to allow a passing maneuver, just drop down to 5th gear, bury the throttle and in a flash you’ve grabbed another spot to take you 20 feet closer to your destination! You actually can turn a mundane drive into a theme park amusement ride with the MASDASPEED6. There’s virtually no turbo-lag and the steering response matches your desire to have fun. Wiggle your toes and the car just wants to take off.

Rear seat accommodation is generous, even for the person relegated to the middle seat. There’s plenty of foot room under the front seats and hip, shoulder and legroom are on par with the best of them. Even with the driver’s seat pushed back there’s sufficient room for legs and knees. There’s a tunnel running through the centre of the vehicle which forces the middle passenger to share foot space with his/ her rear companions, but the floor space is plentiful for three feet in each footwell. While the centre position is never ideal, the seatback in the SPEED6 isn’t unduly uncomfortable. Outboard passengers are treated to a very comfortable seat angle and plenty of thigh support. Trunk space is plentiful with 12.4 cu-ft of luggage space. Unfortunately, the rear seats don’t fold to allow more cargo capacity – again this is where a hatchback is superior to a sedan.

All audio systems are not created equal – not even when they are manufactured by the same company. Case in point: the standard 7-speaker (actually 4 speakers, 2 tweeters and a subwoofer) Bose AM/FM 6-disc in-dash CD changer is terrific and is far superior to a similar system by Bose that was in one high-end luxury car that I drove the previous week – but the European luxury car cost twice as much as the MAZDASPEED6. On some occasions you don’t always get what you pay for.

Standard features on the MAZDASPEED6 are plentiful, such as: Alloy foot pedals including a footrest, Intelligent Key Start system ( flat credit card fob that you can leave in your pocket or purse and still open, lock and drive the car), power windows with all 4 windows one-touch up and down; unique dual exhaust mufflers with silver oval tailpipes; Xenon headlights; 215/45R18 High-performance tires; unique 18-inch alloy wheels; unique front bumper, side sills, rear bumper and body-colour front grille and a “Multi-Mode” Active torque split All-Wheel drive system – to name but a few.

The Conclusion
The MAZDASPEED6 is a sports car disguise. It’s a blast to drive! It turns mundane driving into a thrill a minute, a trip to the grocery store into an adventure. It looks great even standing still, but doesn’t yell “look at me” in a crowd of other boring sedans. Those that can’t afford a BMW/Audi/Mercedes don’t sneer at the MAZDASPEED6, even though it’s in the same league performance-wise. Those that know exactly what this car is and what it’s capable of give you a wink and a smile – they know what a sweet ride this is and they appreciate your subtle taste and why you’ve got a big grin on your face. This car can’t be compared to Accord and Camry because they don’t have an equivalent – so compare it to more upscale cars such as BMW and Lexus – with a huge savings in the purchase/lease department.

Special Note: The MAZDASPEED6 is being discontinued after the 2007 model year. But the question is: when the all-new Mazda6 comes out later this year – will we see a MAZDASPEED6 also?

+ PLUSES:
Incredible surge of power from the Turbo, with a chassis and suspension to match
Understated looks that people-in-the-know appreciate
Intelligent Key Start system 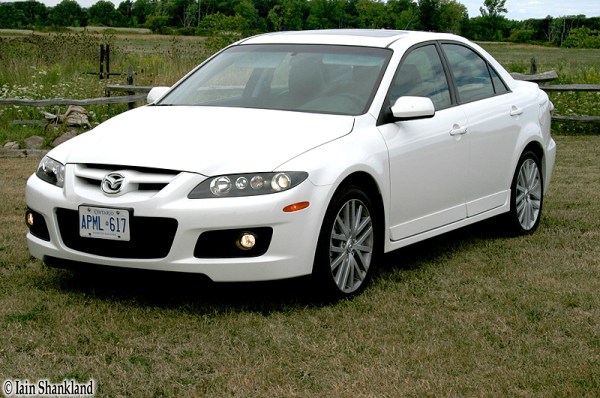